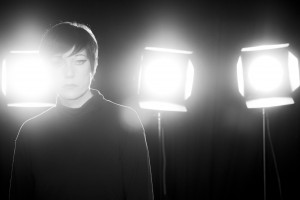 ‘Fabulous. This album is fantastic, so imaginative.’

‘David would have loved this.’

George Underwood, lifelong best friend of David Bowie since they were both 9 years old

‘How fantastic and refreshing to hear all those voices plus that Garson-esque theatrical piano. Makes you fall in love with the songs all over again. “Always Crashing in the Same Car”, a particular favourite in a great new version sung by Ray Burmiston. A brilliant take on that song (which I love). And “Sweet Thing” with David McAlmont. Love it. The whole album is great. Congratulations to all involved. Buy it now.’ 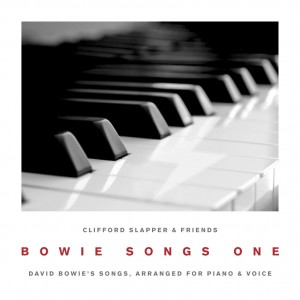 ‘IT’S A SWEET THING. ★★★★ 2017 sees two of Bowie’s former pianists releasing albums containing interpretations of Bowie’s work. While Rick Wakeman was with him as his morning was breaking, Clifford Slapper was there at its twilight. Whereas Wakeman added his flourish most notably to “Life On Mars?”, Slapper’s fascinating footnote is that Bowie mimed to his off-screen piano playing during his comic turn on Ricky Gervais’ Extras.

Subtitled “David Bowie’s Songs, Arranged For Piano & Voice”, Bowie Songs One demonstrates that the simple and the unadorned is the only way forward. An accomplished pianist, Slapper – who also wrote Mike Garson’s biography – chooses his vocalists with great care. David McAlmont reinforces his reputation as one of the country’s leading vocalists on “Sweet Thing”; Marcella Puppini sings “Stay” in a Weimar cabaret fashion, house veteran Katherine Ellis makes something as well-known as “Oh! You Pretty Things” sound like you’ve never heard it before; Ian Shaw successfully adds a touch of showbusiness jazz to “Drive-in Saturday”. Most powerfully, German soprano singer, Linda Hergarten, previously unaware of Bowie’s material, sings “Letter To Hermione” with real shivers-up-spine conviction.

What unequivocally shines through is how well these songs were written; but where Bowie Songs One truly succeeds is that it makes material so inextricably linked with its author sound so fresh and unfamiliar.’

‘To hear these songs in such a personalised context is a real ear-opener. I listened as though someone else had written them.’

‘Clifford Slapper has been playing David Bowie music for many years in England. He has accompanied many singers doing David Bowie music. His love for his music is very obvious. His new CD, with many excellent singers, each singing one of David's songs, is very potent. Cliff plays very well, and it is a heartfelt recording.’ 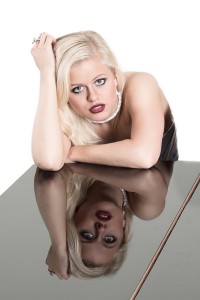 ‘Songs, like poems, are meant to be interpreted, either by delivery or by perception. Many great works, from Beethoven to Bob Dylan, have been presented to the listener by various artists, embedded with their own style and understanding of the original piece. Clifford Slapper, a stellar pianist and long time contributor to the perpetuation of the music of David Bowie, along with a few of his favorite voices, has created an album of Bowie music that is meant to focus the mind, heart, and soul of the listener primarily on the lyric or poetry of the original songs. The music remains an important part of this offering, but the emphasis here is dedicated to give the Bowie fan a new vision of some of his masterpieces. I thoroughly enjoyed listening to Clifford and his friends and I am pleased to have added his CD to my personal collection.’

Ken Fordham, who liked the Bowie Songs One "Drive-in Saturday” video on Facebook, played the saxophone on the original David Bowie recording on Aladdin Sane in 1973

Singer-songwriter, Tanita Tikaram retweeted this Crash Records’ tweet: ‘Taken a copy of Bowie Songs One by Clifford Slapper & Friends home to listen to. It’s absolutely gorgeous and so relaxing. Really enjoying this album.’

‘Cult pianist Clifford Slapper has made the album I wish Bowie had made.’

‘Now playing Bowie Songs One by Clifford Slapper and it's absolutely gorgeous and so relaxing. All the songs have been arranged just for piano and voice and they work really well. It's definitely worth checking out. Some fabulous vocalists on the album creating beautiful new versions of great David Bowie songs. More soothing than a candle-lit bubble bath with a nice glass of bubbly.’

‘Finally, a rather special tribute album to the great man, put together by another pianist much admired by Bowie’s famous collaborator Mike Garson. Slapper, who has worked with Bowie too, has stripped down a selection of classic songs to piano and voice, here accompanied by a group of outstanding singers, to exemplify how Bowie’s songwriting genius still shines through. Highlights include Marcella Puppini interpreting “Stay” from Station to Station, and David McAlmont doing “Sweet Thing”.’ 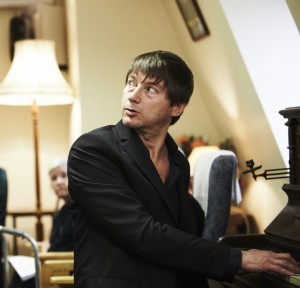 ‘Stand-out tracks are difficult to spot as they all truly have their own unique special touches of magic. The way in which the songs have been interpreted awards each composition with their own new flavour, coupled with the familiarity of Bowie’s songwriting talents and the expert musicianship of Clifford Slapper. If you are a Bowie fan who likes to hear his work presented in new ways, then this album is definitely for you.’

‘Oh, I am in love with Bowie Songs One. Thanks, Clifford Slapper. A masterpiece for sure.’

‘Bowie Songs One is an utter gem. Clifford Slapper and his collaborators have produced something quite magical.’

‘This is a beautiful album with stunning piano playing and heartfelt vocal performances. The great man would certainly approve. Congrats, Clifford Slapper.’

‘I think of artists' catalogues as walled zones that can only be entered by finding the right portal at the right time. David Bowie's “Sweet Thing” was the portal for me. I listened to Diamond Dogs because “The Laughing Gnome” and “Let's Dance” made me curious. But “Sweet Thing” pinned me to the wall in a way that they couldn't. It has always been a must-do for me. Thanks to Clifford Slapper for including my interpretation on this marvellous collection.’

‘The songs on this album are such radical departures from their original arrangements, that it's like you've discovered new Bowie songs out of nowhere.’

‘A wonderful collection of Bowie songs arranged for piano and voice by Clifford Slapper. This sat on my desk whilst I tried to find the space and time to give it a proper listen without it just becoming background music whilst I am working. And boy, was it worth waiting for. There are many of my favourite Bowie songs on here, and they are revisited in the style of the subject of Clifford's book “Bowie's Piano Man: the life of Mike Garson”. Very much lounge jazz and it's beautiful. Not only did we lose one of the greatest lights of a generation just over a year ago but both Clifford and myself lost brothers last year and so this resonates on a personal level for me, as well as being a superb tribute to the man and his music. Thank you Clifford.’ 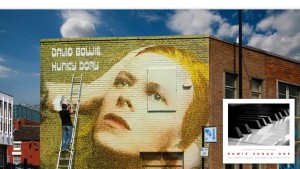 ‘It’s fabulous. Hearing all these songs that I know so well performed (not just covered) so beautifully is sheer joy. Thank you.’

‘A must for any David Bowie fan. Great vocalists covering songs with just Clifford Slapper on piano. Just downloaded my copy after hearing Billie Ray Martin and David McAlmont’s tracks. Shivers, I tell you. If only Billy MacKenzie were still around for this.’

‘SO beautiful. Both the singing and the piano. Truly exquisite.’

‘Just downloaded this album and it’s superb. The version of “Time” is sublime. “Drive-in Saturday” is brilliant. The version of “Oh! You Pretty Things”, with Katherine Ellis’s vocal is majestic. The album covers a range of Bowie’s songs all arranged for piano and vocals. Seriously impressed!’

‘Love this CD – has been playing in my car since it arrived. Just vocals and piano. The arrangements are great and all so different. Clifford Slapper’s piano playing is superb. My favourite has to be Ian Shaw singing “Drive-in Saturday”.’

‘Great. You have managed an incredible recording of piano which I know is notoriously difficult to get. Magic.’

‘I have been a Bowie fan since the seventies and have everything that he has released and this album will sit alongside them and be played very often.’ 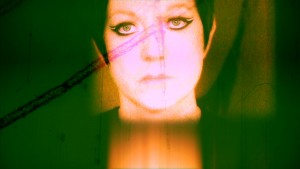 ‘Adam Dean from the Bowie Down Under Community of Australia/New Zealand dropped by this evening with his sealed copy of Bowie Songs One hot out of the mailbox and we sat and listened to it on my surround system for the very first time. What an incredible achievement. The arrangements are fabulous and in my honest opinion, “Stay” even surpasses the original. In your arrangement it could happily sit next to some of the softer tracks like “Wild Is The Wind” and “Word On A Wing”. Congratulations. I will be recommending it to anyone who will listen!’

‘Bowie Songs One’ is a new collaboration of familiar Bowie songs which have been re-interpreted for piano and voice. The piano in question is established musician Clifford Slapper who has also produced this album and features heavily on it. The album project started in Summer 2014, when David Bowie was still very much alive and the recording was fifty percent completed in January 2016, at the time of his tragic death. The album is dedicated to his memory.

The compilation is a fully acoustic and unplugged affair where "the songs are stripped bare to reveal their emotional core" explains Slapper who has worked closely with Bowie in the past, playing piano for him on Bowie's last ever TV appearance. The CD itself features a charming photo of the two of them together at the piano.

The album opens with Stay featuring Marcella Puppini, of The Puppini Sisters and as the liner notes state much better than I ever could, "(the song is) re-imagined in Weimar Cabaret and pre-war decadence". Marcella has a supreme voice which is utilised here to its tenderest effect.

The impressive voices also featured on the album provide a spectacular showcase, which lend a fresh ear to familiar Bowie compositions. Coming from a range of diverse genres, including the jazz giant Ian Shaw, Katherine Ellis from the world of gospel and soul music, and Ray Burmiston who is perhaps better know for his photography, but who interprets Always Crashing in the Same Car forcefully, and evidently fuelled by a genuine love for Bowie.

In the midst of the album we're treated some more familiar pop voices in the form of Techno stalwart, Billie Ray Martin singing After All, and 'old cathedral pipes' himself, Mr David McAlmont, delivering Sweet Thing in the tenderest way you will ever hear. David employs the full three and half octaves of his vocal range to the most mesmerising effect, taking you on the most spine-tingling musical journey for the duration of the track.

Linda Hergarten is the only vocalist whose classical tones appear twice on the album in the form of Letter to Hermione (about Bowie's first lost love, Hermione Farthingale) and she concludes the album with a beautiful version of Time.

Stand-out tracks are difficult to spot as they all truly have their own unique special touches of magic. The way in which the songs have been interpreted awards each composition with their own new flavour, coupled with the familiarity of Bowie's songwriting talents and the expert musicianship of Clifford Slapper.

If you are a Bowie fan who likes to hear his work presented in new ways, then this album is definitely for you.’